(To Be Incorporated Into FAA Order 7400.2, Procedures for Handling Airspace Matters)

Traffic Pattern Airspace: There are many variables that influence the establishment of airport arrival and departure traffic flows. Structures in the traffic pattern airspace may adversely affect air navigation by being a physical obstruction to air navigation or by distracting a pilot’s attention during a critical phase of flight. The categories of aircraft using the airport determine airport traffic pattern airspace dimensions. (See paragraph 12-1-4). 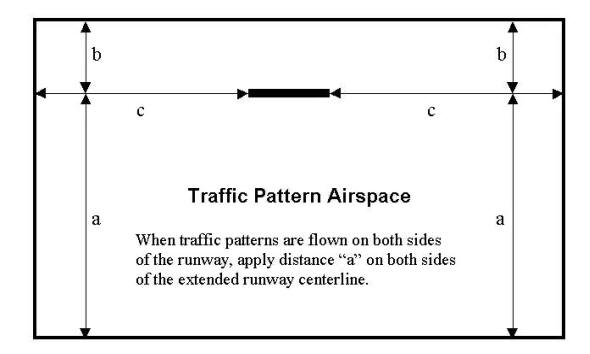 How the distances are determined

* Increase distance “c” by adding distance specified in “d” for each aircraft over four (of the same category) anticipated to be operating in the traffic pattern at the same time.

(b) Within Traffic Pattern Airspace, a structure that exceeds any of the following maximum allowable heights is considered to constitute a hazard to air navigation except as noted in 6-3-8d.1.(c) & (d):

(1) The height of the transition surface (other than abeam the runway), the approach slope, the horizontal surface, and the conical surface (as applied to visual approach runways, 14 CFR Â§77.25).

(3) Beyond the lateral limits of the conical surface and NOT in the climb/descent area of any runway – 500’ above AE not to exceed 500’ AGL. 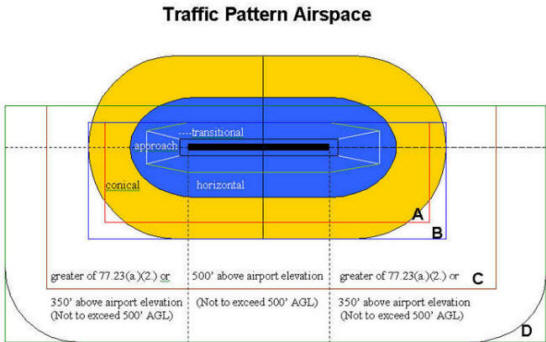 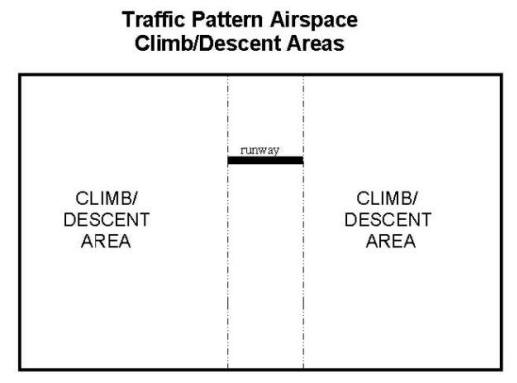 (d) Exceptions may be made on a case-by-case basis when the surrounding terrain is significantly higher than the airport elevation or “density altitude” is a consideration.

Things You Should Know

Notice of Proposed Rulemaking (NPRM) Safe, Efficient Use and Preservation of Navigable Airspace

Private airports with procedures are now protected by FAA